Resource Wars - How To

Hello space friends I just discovered how do the new "Resource Wars" after trying a few different times and doing it wrong.

I wanted to share what I've found, so you hopefully won't make the same mistakes I did.

1st: What are EVE Resource Wars?

It seems from my brief attempts at doing these, its like speed mining without keeping the ore you mine. I know it sounds crazy, tell me, I've done 7 of them so far. But they are kind of fun.

The activity isn't without reward, its just ... different... which IMO is good. EVE needs different activities to break up the click and wait which  has been mining. Its interactive, its not in the same star system hour after hour and its quick. Well, the ones I did were quick, I'm sure the harder ones aren't as fast.

2nd: Where can I find this amazing activity?

"The Agency" button. Its this little button I never used, or knew existed. You can find it on your task bar and it seems to work like that old external Agent site used to. You can find the old school agents with it, asteroids belts, anoms all sorts of stuff we old timers just saw on our overview.

With in it, there is a drop down that says "Resource Wars". They are broken up into levels that are based off a faction relationship with some corp. Before I started this my standing with that corp was 0, but with my connections skill or which ever skill gives you free points, I was able to do Level 2's without even doing 1s. 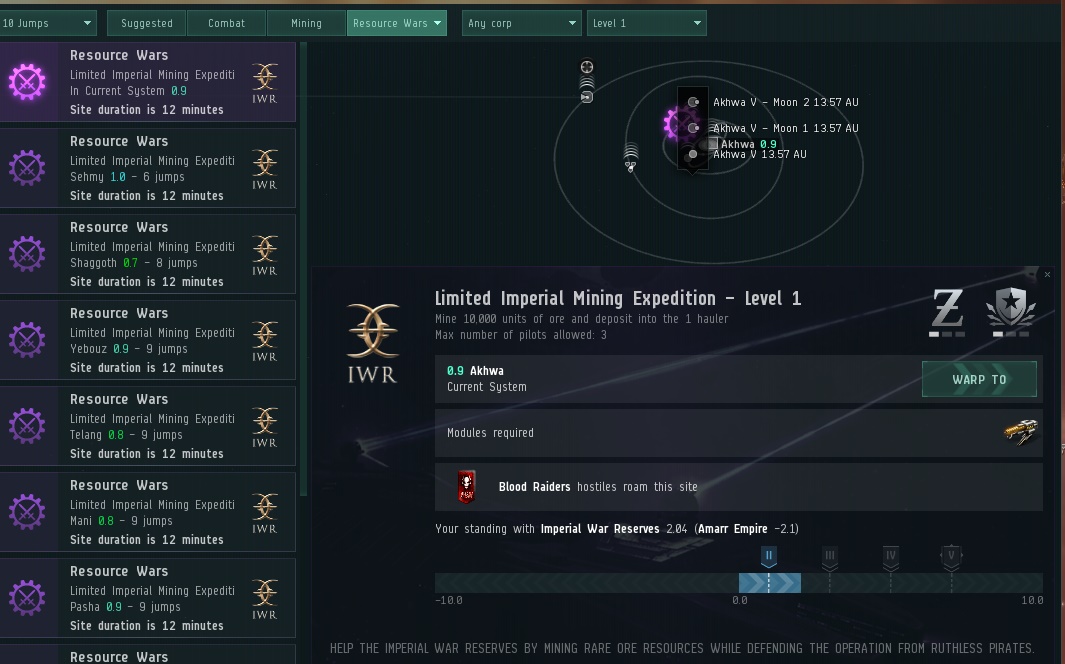 
Some information that threw me on this, which perhaps I'm just dense but seriously I didn't know how mining really worked... I couldn't figure out from the description if I was the one hauling the ore or not. I kid you not I tried fly to one with a hauler, thinking I had to haul 10,000 units. I was honestly perplexed trying to figure out if I had to warp out of the site, drop off the rocks for my hauler which couldn't enter, then warp back again...

The hauler is an NPC hauler, all you as a pilot need to do is fly there, mine 10,000 units and drop them in the hauler, which for this mission is an NPC Orca that is waiting for you to drop ore into.

Took me a little while to figure that out.

There is a list of frigs on the 'mission window' that you can bring. All of them are T1 frig, no faction.

Well I went in with what I could fly with 3 pilots (I triple boxed it) flying this exact fit.


This was a bit overkill IMO. I could have done the mission with 2 of these. The trick is to not let your miner II's totally cycle. I'm sure this is some sort of mining tech I never knew, but I guess the rocks are very small and a full cycle of these miner IIs is more than is needed to destroy the rocks.


You could I'm sure do this with T1 versions of this fit, if your quick. You do need to kill the rats, so I think that would be a challenge with just 1 venture.  The rats I was fighting were fit with a web, so you may have trouble doing this site solo even in a blingged out Venture. The web would make it hard to mine 10,000 ore then drop it off before the timer expired. Not only that, but darn near impossible to kill 2 rats with a single venture.

Well if your familiar with the Blood Raider Celestial Beacons, these work very similarly. They are right there on your overview.

The timer doesn't seem to start till you land. At which point this guy pops up and gives you a scary message. 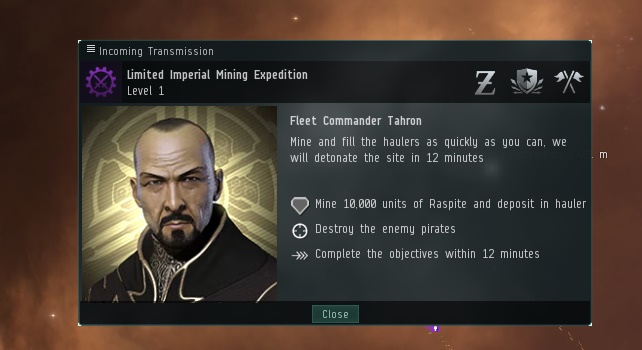 He wants you to destroy the pirates. Add the pirates to your overview...

Make sure this Ore type is on your overview, do this before you start, or you won't see the dumb rocks. Failed one of these missions because I couldn't figure out WTF he was talking about. Mine rocks? what rocks?!?

There is a little timer on the left that tells you whats left to be done and there is a ticking timer which is super annoying if you let it get below 1:00. (Ive never head that before in EVE and I thought I was losing my mind)

Once the Orca is filled and the pirates are dead.

You are rewarded with all the left over rocks being deleted from your cargo and this message.Which personally I thought was dumb. The "ACCEPT" button is actually something you need to press. Like I wouldn't accept it.. "O no don't give me money and faction.. " :P Even if I didn't want it, wouldn't a "DENY" button next to it make more sense? Seems silly to have just 1 button.

Anyway... You're also rewarded with what I thought was a fairly hefty chunk of faction points. Which for me in Amarr is awesome. You used to need to do level 1 missions in low sec in order to not be killed by Amarr and raise your faction standing. After about 40 of those I wanted to jump out a window.This is way better.. because if that kid loses her doll one more time.. i sware.. so help me.

After about 7 of these with my 3 characters my Amarr faction was a net of 0.184 which is awesome!

I haven't a clue what the LP is used for I guess I'll eventually figure it out, but I wanted to share some pitfalls I came across while trying this thing.


My opinion on this as an activity in EVE.

I'm going to be totally honest, I'm not a miner. The activity for me has always been just boring. IMO this Resource Wars is what mining should have always been. Its interactive, it makes you think, it keeps you engaged and can't be done by a 5 year old. (not making that up, I had my daughter when she was 5 mine, even she got bored)


Great job CCP. You keep adding stuff like this and I might stop being so critical of you.


Posted by Longinius Spear at 8:15 PM No comments:

Picture of my arm, taken by CCP Guard