Based on my blog hits, the majority of my hits are focused on my PVE content. Which I think is strange, but meh, whatever. I guess bears read more.

I wanted to make a quick post on my C5 RR Rattlesnake set up. I've had a few questions about it in corp so if I could simply link this blog to them, it would give them all the info they needed.

The goal of this setup and I'm not going to say its the "Best Setup" is to do C5 sites and clear C5/C6 gas sites. I'm keeping it cheap and effective because I triple box this set up from time to time. I can't have a lot of random things happening while it do I, because that makes it harder. If you have a "Better Setup" please post a link to your blog in the comments and we can measure ePeen. :p

The price of Rattlesnakes has dropped recently to 325m each, which IMHO is crazy for a faction battleship. I'm going to break the fit down to total price.

Now that may look like a lot out the door, but if you compare it to some of the solo marauders out there that are doing C5 sites, this is less. I know there are even cheaper ways of doing them, but this is the cheapest setup I have personally discovered. 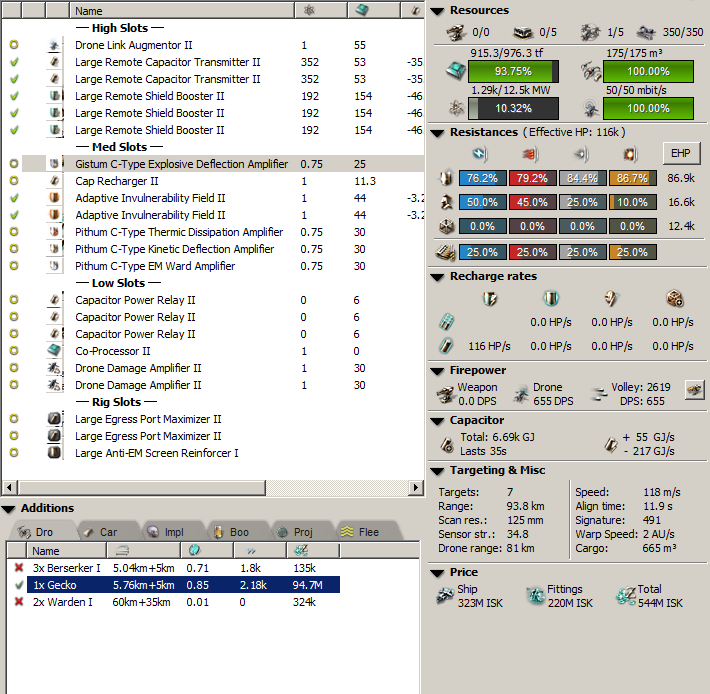 Break down of how it works:

I run 3 of these ships on a triple box set up. Its a combination of passive tanked and active tanked. Remember the nuet pressure is very intense on some C5 sites and specifically at Instrumental/Vital Core gas sites.

The three rattles warp into a site and instantly target each other. Each rattle sends its Large Remote Cap transmitter to the other 2 Rattle snakes. The Large Egress Port Maximizer II is the key to making this work. It effectively reduces the cost of transferring cap, creating a surplus transfer amount to the other rattles. So much of a surplus that, both targeted rattles can run all their Invulns and 2 Large Remote Shield Boosters, under sleeper nuet pressure.

You can run 3 Remote Shield boosters with good skills for about 5 minutes, but not under direct nuet pressure.

The DPS comes from the single Gecko. You could do this entire setup with 2 Berserker IIs if you want, its about the same DPS as a single gecko, but the gecko moves faster, has better tracking and overall does more dps in the log run.

What I like about this set up is its very "hands free" if that makes sense, all you really need to do while triple boxing this set up is move a few remote reps from the sleeper primaried rattles and make sure your geckos are targeting the same thing. If they aren't, you could screw up the triggers, and the site will take longer because of sleeper remote repairing.

This question always gets asked by people over and over again. I'm guessing because in Kspace its all about the ticks. Well in Wspace, our payouts are some what random, and sometimes you can't simply just grind out some anoms, when ever you wish. There are threats all around you, and the time to bust out the rattles just isn't perfect.

Instead of giving you an ISK per hour, I'll give you an estimated pay out based on the activity. I hope that's sufficient.

Instrumental Core Gas site - 4 Sleeper battleships: The direct sleeper pay out is between 70m and 80m in blue loot and sleeper salvage. It takes about 5 minutes to clear. Total Gas value if you huffed it all and lived.  400m in C320 - 38m in C540 Gas. -

Vital Core Gas Site - 4 Sleeper battleships, 4 sleeper frigs: Believe it or not this is one of the harder sites to do, the DPS and nuet pressure right off, is VERY high. You have been warned. The direct sleeper pay out is 90m to 110m in blue loot and sleeper salvage. It takes about 5 to 10 minutes to clear with this fleet. Total gas value if you huffed it all and lived. 450m in C540 - 33m in C320 Gas -

C5 Core Garrison -  This site takes between 45 to 50 minutes to complete. This is multiple waves of sleepers and its recommended you scout the anom first to bookmark a sleeper structure. You don't want to warp to this site at 0, because of the Sleeper sentry drones. They are really far from you, and why make it harder? Just book mark a sleeper structure near the Sleeper sentry guns and warp in at 10k. -- Total pay out in blue loot is 235m. + Sleeper salvage, normally around 60m.

C5 Core Stronghold -  This site takes around 45 to 50 minutes to complete. This is my favorite anom. Main reason, the triggers don't scram you after the 1st set. So you can kill every single scam ship, without triggering the reinforcement wave. Why is this important? Well because of pilots like me! If your scrammed by sleepers, I can bring my bring my scout/murder fleet to you and there isn't much you can do about it without losing a single rattle. When doing the site, again, get a warp in first so you aren't sending your geckos far and wide to kill sentry guns. Total pay out in blue loot is about 240m with about 60m in sleeper salvage.


I'm not going to go through ALL the sites, but you get a fairly good understanding of how many sites you need to do, in order to recover your investment. About 3 gas sites, and about 5 anoms. After that, its pure profit, (minus your time of course).

Tips to keep you alive:

There are people like me in the universe and I love me some player ship explosions. This is how you avoid me killing you.

1. Always scan out every single connection to your bear hole. At least know what you're connected to, the less connections the better. Peek your head into each one and see who lives there. Do a quick "Info" from the POCOs. Find out who the owners are, and search their kill boards for PVP activity. Use www.evewho.com for a quick reference. Lots of PVP activity, don't bear. They could be simply logged off, off Dscan, or will eventually log in at the worst possible time and murder you.

2. Once you have peeked your head in and checked out your neighbors, remove all sigs from your scanning overview. Leave that overview up while you are doing a site. The second you see a new sig in system, scoop your drones and get the fuck off grid. A new sig in system should scare the piss out of you. Someone like me, might have just rolled into you, and I can find you and your fleet quicker than you can say, "Damn that was fast".

3. Each ship you have should have on it a mobile Depot, Core probe launcher, Core probes, cloak, Target spectrum breaker, ECM x4 multi and a Large Micro Jump Drive.  Now each of these items will be used at different times for different situations, but for the most part, the most important thing to remember if you are jumped is to keep a level head.  Be calm, be direct and keep your cool.

When you warp to a site, you should drop for at lest 1 of the ships, your mobile tractor unit and mobile depot. The ship that dropped the depot will be refitting for ECM  and maybe your MJD the second you see a new sig appear. Depending on how much sleeper dps you have coming in, you may need to adjust how much of your tank you remove. Once you're done, again depending on how much sleeper scram you have going on, the other ship drops a mobile Depot and does the same. This should get you out of the site before someone like me comes and bubbles you.

Now if you just stick to Core Strongholds, you should be able to handle all scram stuff long before you need to GTFO. You could also clear all but 1 trigger scram ship, to increase the chance you will get a lucky ECM off on the single sleeper if you need to GTFO.

Now if they came through an older sig and you simply saw them land on grid with no warning. You're not toally fucked but you're not out of options. You're only hope at this point is to refit your main ship for a target spectrum breaker and Micro Jump Drive. Scoop your mobile depot, and the other ships drop theirs. If the gank ships are on the ball they will kill the depot before it onlines, but its a chance. Then its just a matter of seeing if you can time your MJD  with your target spectrum breaker. Fire up the MJD... wait for it to be almost done, and then hit the spectrum breaker. Insert praying along the way.

There are more things you can do if you live in the hole, like close all connections, don't crit them, because T3Ds will just come in and kill you just the same. But if you keep in mind that everything is an investment, and with most things in EVE with the danger of the activity, comes the 'fun'.

I hope you learned something from this, what to do, what not to do.. how to do it better.. Don't care.

The point is your in Wspace and Wspace is the place, Kspace is for chumps.

Some guys on Reddit gave me some tips to improve the set up.

Here are their suggestions

Posted by Longinius Spear at 9:00 AM 4 comments:

Picture of my arm, taken by CCP Guard